Holding companies invest in shares of subsidiaries and/or other assets. They can be broadly grouped into two:

Companies like Kama Holding or Tata Investment Corporation are pure investment companies with no other operations of its own. While companies like Bombay Burmah Trading Corporation or Rasoi Ltd have a separate operating business outside their investing activities.

These companies often have a set of unique traits that are worth noting before attempting to invest in them.

Holding companies usually trade at a discount to book value

Holding companies usually trade at a discount to their book values. This happens primarily due to the following reasons:

Above two reasons together justifies a 20-25% discount at holding company level against their book value. Further discounts may exist due to factors that may be perceived as additional inefficiencies or risks by investors, such as the below:

Other features of holding companies

All these factors make investing in holding companies a different kind of challenge.

With the above mentioned traits in background, lets look at a list of holding companies trading near or below their book values: Past few months have seen unprecedented volatility and bearishness in the equity markets, specifically in the mid & small-cap space. Volatility in oil prices which has cascading effect on current account deficit and rupee, combined with other factors such as politics, trade tensions, etc. have been potential contributing factors. In view of this, we propose to allocate a portion of the equity investments into holding companies in the following manner:

Based on these, following companies may be considered for investment, each having equal allocation, aggregating up to 10% of the overall equity assets for the basket.

Brief outline of these companies are provided below.

Uniphos Enterprises Limited holds 25,549,798 equity shares of UPL Limited amounting to 5.05% equity stake. Both the companies are promoted by Nerka Chemicals. Dividends received from UPL is the primary source of earnings for the company.

Uniphos is also engaged in the business of trading of chemicals. At present the trading activities form insignificant part of their overall operations.

Uniphos is an indirect play on UPL Its 5.05% stake in UPL is presently valued at around 2080 crores.

In addition to UPL, company also has around 10 crores invested in various mutual funds, 5 crores in cash and another 175 crores in land, apart from other minor assets. Company is debt free, which takes its book value to around 2260 crores. UPL Limited (UPL, erstwhile known as United Phosphorus Limited) is the flagship UPL group, which has emerged as one of the leading agrochemical companies in the world with a widespread presence across the globe through various subsidiaries/associates as reflected in around 80% of FY18 consolidated revenue is contributed through sales outside India. It has a track record of more than 50 years and is promoted by Mr. R. D. Shroff and family. As on March 31, 2018, the promoters held 30.27% stake in the company. The group has presence in various segments including seeds, crop protection products, intermediates, specialty chemicals and other industrial chemicals. UPL’s growth strategy is built around filing its own registrations globally and acquiring products and companies to increase market access and having strong & cost efficient supply chain.

Market Capitalization of the company is 2742 crores, out of which 61.39% is held by promoters. Free Float is 1059 crores 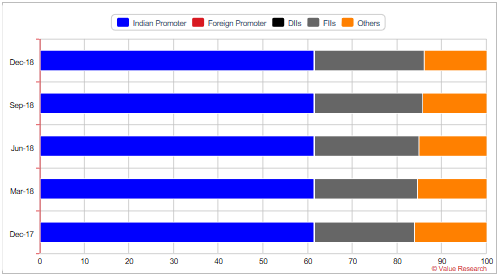 Company was following GAAP until FY18 where investments were valued at lower of cost & market value. September 2018 onwards company has shifted to IndAS and restated its investments based on market value. Consequently, total assets jumped from 916 crore in March 2018 to 10,880 crores in September 2018.
Long term loans & advance: 218 crores, Short term loans & advance: 121 crores

JSW Steel is one of the leading steel producers in India with a steelmaking capacity of 18 mtpa. Its integrated steel manufacturing units located across three states (i.e., Karnataka (12mtpa), Maharashtra (5mtpa) and Tamil Nadu (Salem – 1mtpa)) have facilities to produce a wide range of flat and long steel products. Furthermore, through its wholly-owned subsidiary (JSW Steel Coated Products Ltd), the company is one of the leading producers of value-added downstream steel products in India specializing in galvanized/galvalume products), Cold Rolled Coils and high-end colour coated sheets. The company also has a plate-and-pipe-mill business in the US and coal mines in the US and Mozambique, which operate through its international subsidiaries. During FY18, JSW Steel achieved its highest ever crude steel production of 16.27 mtpa as against 15.80 mtpa in FY17. In line with production growth, saleable steel volumes also recorded Y-o-Y growth of about 5.68% increasing to 15.62 mtpa in FY18. Company also has extended around 1100 crores to SRF in terms of loans and advances. Most of these loans are interest free.
Revenue for the company is primarily dividends, and also small interest component from the small interest bearing portion of the related party loans.

SRF was established in 1970 as Shri Ram Fibres by Mr Arun Bharat Ram, and got its present name in 1990. It is a part of the Shri Ram group of companies. SRF has 11 manufacturing units in India, two in South Africa, and two in Thailand, with sales spread across 75 countries.
SRF is primarily present in the Technical Textiles (TT), Chemicals & Polymer (CP), and Packaging Films (PF) business verticals. Under the TT segment, the company manufactures tyre cord fabrics, belting fabrics, coated fabrics and industrial yarns. In the CP segment, it manufactures fluoro-chemicals, fluoro-speciality chemicals, and engineering plastics.

Maharashtra Scooters is a core holding company with equity investments in various Bajaj Group of companies, along with other FI instruments
Market cap of the company is around 3500 crores, against equity investments alone of over 8000 crores and BV of around 9500 crores.